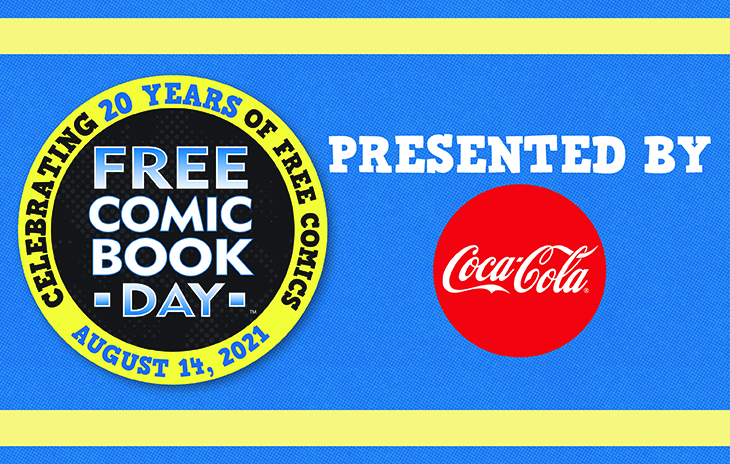 Free Comic Book DayTM one of the comic book industry’s most beloved and anticipated annual events being held this year on August 14, is celebrating its 20th anniversary. To commemorate, we have announced additional plans including a social media campaign and sponsorship partnerships with Coca-Cola and PREVIEWSworld PULLBOXTM.

Earlier this month, in celebration of our 20th anniversary, we launched the #FindYourStory social campaign. The campaign encourages readers to explore new worlds, revisit their favorites, and discover new destinations in the pages of a comic book. The cornerstone of the campaign is exclusively designed, art deco style, virtual posters that highlight locales featured in some of the FCBD titles available on August 14. Fans are encouraged to share their all-time favorite and newly discovered comic book destinations on social media and use the hashtag, #FindYourStory.

PULLBOX and Coca-Cola have also joined FCBD’s anniversary celebrations this year as sponsors. Coca-Cola will serve as the Presenting Sponsor and be featured on printed promotional materials and branded merchandise distributed to local comic shops in advance of the event. PULLBOX, which launched earlier this month, is a new service that allows comic shop customers to easily manage their preorders and subscriptions online in partnership with their local comic book shop.

Previously announced plans for the anniversary celebration include a specially designed anniversary logo and commemorative artwork from fan-favorite creator, Skottie Young. Young has created a one-of-a-kind design emphasizing the power of imagination and the endless possibilities of comic storytelling. The design will serve as the commemorative T-shirt and poster for FCBD 2021 and will be available for purchase at participating local comics shops.

With fifty comic book titles that range from superheroes to movies and video games, to beloved franchises, and all-ages favorites, Free Comic Book Day 2021 is poised to attract readers and fans of all tastes to participating local comic shops on August 14.

Thanks for Celebrating FCBD's 20th Anniversary with Us! Next Article