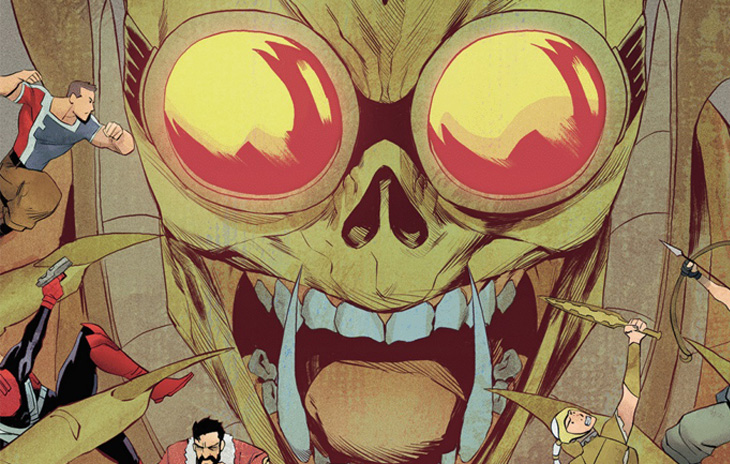 One world under Claw! The world has survived threats from space and the advent of heroes but nothing like this! After the Claw successfully manipulated some of the most influential people to unwittingly shape earth in the Claw's vision, who will be left to oppose evil and save the future of humankind?

We caught up with series writer Keith Champagne, colorist Mariano Morlaes, and artist Scott Brian Woods to learn more about what inspired their extraordinary characters, what to expect next in the series, AND to rifle through some really fun rapid fire questions!

Keith Champagne:  I don't want to give too much away  so how about some key words? The future. The Claw. A desperate  plan.  Impossible  odds. Death. One final  chance.

Mariano Morales: That you are about to embark on a breathtaking story where surprises are the order of the day.

Scott Brian Woods: The future isn’t as bright as it appears.

Keith: I prefer not to spell  out the themes, I feel like part of the fun of reading  a comic is  interpreting what the underlying  theme  is and what it means  to you. But take my word for it, there are a couple of themes  present and I hope they resonate.

Mariano: You have ahead of you a story in a dystopian world where you will find adventures, time travel and lots of action in a really cool universe.

Scott: No matter what do the right thing. When something isn’t right speak up and do something. Be the change.

Keith: Handling a large cast of characters and trying to give each character their own correct, distinct personality and way of speaking is always fun for me. And building a story is like  building a mental jigsaw puzzle; it's extremely gratifying when a piece clicks into place just the way it's supposed to.

Mariano: I think the trips inside the Shimmer were really interesting for me to do.

Scott: Getting to draw some of these characters that date back to the late 30s and 40s and just knowing that you’re adding to the history was for me a real kick.

Keith: My personal life and Terminator 2, as well as about a zillion old avengers and Justice Society comics.

Mariano: I tried to be inspired by comics with vibrant and dynamic colors.

Scott: I’d say most everything has been already in the works before I was brought on, but I did get to adjust a little of Claws costume when he goes full Claw. I think the inspiration for the flowing loincloth bit came from Conan comics. Villains and evil wizards always had that look. It’s a good look.

Keith: You're all  going to die.

Mariano: Thank you for letting us share your adventures and making our lives more exciting!

Keith: I would  expect that every character will have their own challenge to overcome and their own moment to shine but at the end of the day, sometimes evil just wins. This may be that day for Equilibrium, the deck is certainly stacked against  them. I'd also like to apologize to The Silver Streak. It's only because I love her and I feel proprietary about her that I put her through such a hell.

Mariano: At the moment there is not much I can tell you but I assure you that what is to come is going to be awesome.

Keith: I don't remember the specific comic, maybe Adventures Into Fear? Morbius was fighting a giant monster made of eyeballs and  for me, it was love at first sight!

Mariano: The first comics I remember reading as a kid were Patoruzú and Mafalda. Then a little older I started reading Batman, The New Titans, The Justice League, among others.

Scott: The first comic I remember reading would have been my older brothers Savage sword of Conan, the larger magazine ones.

Keith: The long hours, poor pay, endless deadlines and feeling like I'm letting everyone down, and the opportunity to be creative for a living.

Mariano: I think it would be to have the chance to work on something that I love and am totally passionate about and to be able to work with people who share the same passion through this work.

Scott: Comics taught me to read. I struggled and my grandfather pushed comics on us. It worked. So being part of something that was such big part of growing up, is just awesome. Added bonus I love telling stories and drawing cool characters.

Keith: Comics are the greatest form of literature invented (seriously) and the world will eventually catch on to this. Also,  the artists that draw comic books are the more versatile, talented illustrators in the world. It's really  an amazing art form with such a rich history of creators and characters. There's so much great work to discover.

Mariano: Because they are great! You can find really great stories with beautiful art that is sure to captivate you!

Scott: Reading comics is the best form of entertainment. Period. I like movies, TV, books, but there’s something about diving into a well drawn and well written comic that totally transports you. Escapism. We need that more than ever right now.

Keith: Not while I'm writing, no. I do need background noise while behind the drawing table.
Mariano: I can listen to a pretty varied type of music when I'm working...I really like Tool and that style of music, but I can also listen to bands like Placebo, Soda Stereo, Depeche Mode and I love 90's Grunge and all the 80's Pop.
Scott: Yes. I’ll listen to a lot of different stuff, from Radiohead to the Conan the Barbarian soundtrack

Keith: All of them but I do love supeheroes and westerns the most.
Mariano: I like superheroes very much, but I also like science fiction stories and for many years I have been a lover of Japanese manga.
Scott: Scifi/Fantasy

Keith: Definitely mornings
Mariano: Definitely in the morning
Scott: Night, 11 pm to 2am is when things are firing for me.

Keith: I would be the very first person eaten.
Mariano: I don't think so hahaha!
Scott: Absolutely, I grew up in the wilds of Canada. I already have a plan.

Keith: I'd rather be invisible. I'd make a great bank robber but if I could fly, I'd kill myself  slamming into a tree or house or something.
Mariano: have the ability to fly.
Scott: Flight. That would come in handy for the Zombie apocalypse.

Keith: I'd be the villain for sure, but the villain that wants to be a better person.
Mariano: Hero
Scott: Hero, a wolverine type… a good guy with some edge.

Keith: Watchmen and Batman: Year One. Can't choose between the two.
Mariano: Fantomah.
Scott: That’s very tough but I’d say Darwyn Cooke’s DC: The New Frontier. If I ever struggle, I have that close to the drawing table at all times and I say “what would Darwyn do?”