Owen the Barbarian has been cursed to do good with what remains of his life. His bloodthirsty weapon, Axe, has become his moral compass with a drinking problem. Together they wander the realm, foredoomed to help any who seek assistance. But there is one thing Owen hates more than a life with rules: Witches.

We caught up with series creators Michael Moreci and Nathan Gooden to learn more about what inspired their extraordinary characters, what to expect next in the series, AND to rifle through some really fun rapid fire questions!

Michael Moreci:We designed the first issue, which is the FCBD offering, to tell you everything you need to know in like the first 8 pages. I think that’s the beauty of it: Owen is a barbarian cursed to do the one thing he’d rather die to avoid: He has to be good. A trio of witches hexed him, for reasons yet unknown, and now he roams the land, helping anyone who asks for it. He’s like Hulk in the 1970s TV show, except he absolutely hates it. Oh, and accompanying on his journeys is Axe, literally a talking axe who acts as Owen’s moral compass. He also gets drunk on blood, and the more tastes he gets of it, the more he wants it. He’s like a bloodthirsty Jiminy Cricket. Welcome to the world of Barbaric. 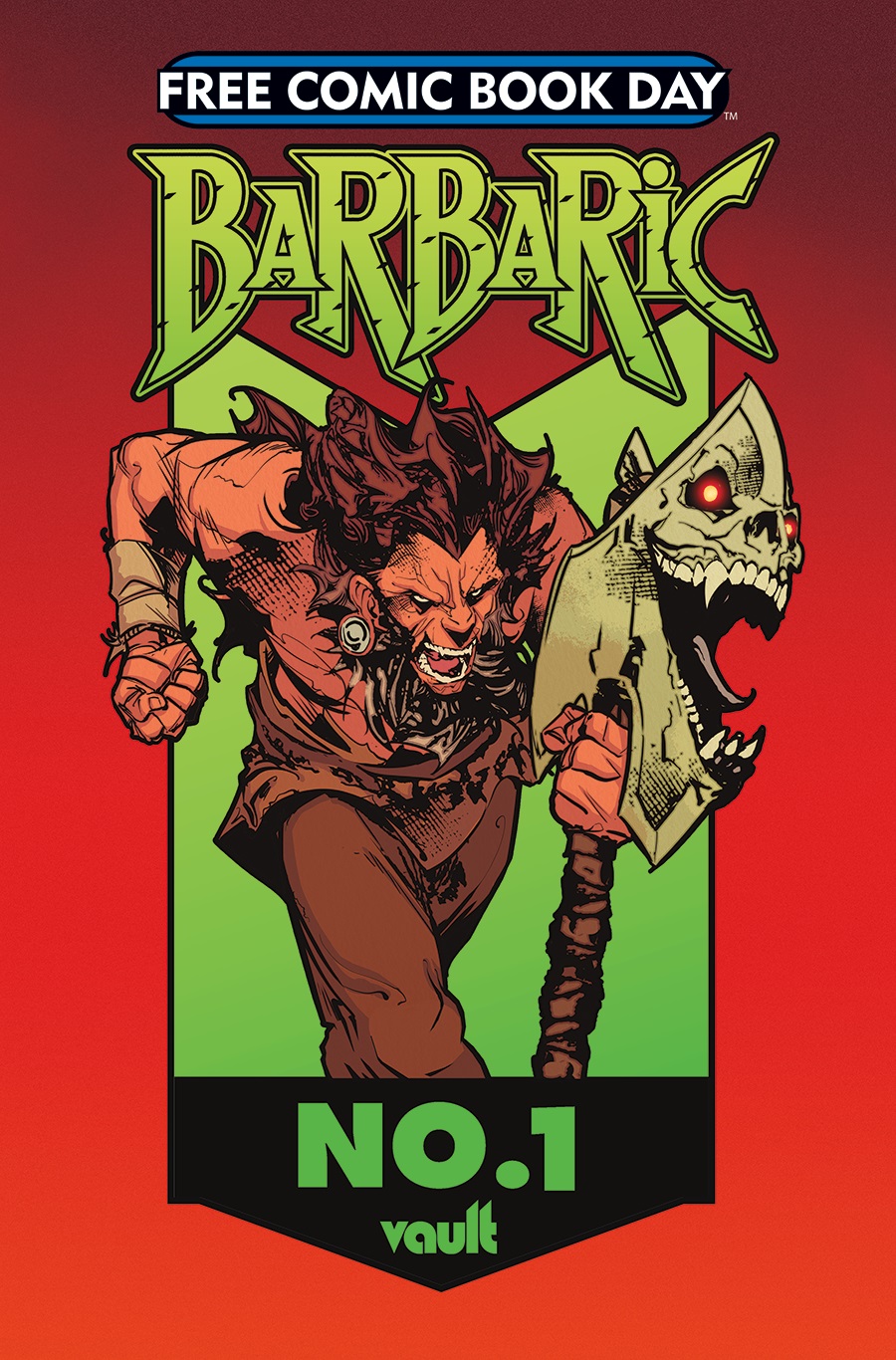 MM: You know, we live in a world where everyone is under a microscope and, because of social media, forced to be our best, most moral selves 24/7. But being good all the time sucks, as Owen would agree. Which is what makes Barbaric so much fun–we get to grumble alongside Owen while also having the catharsis of his bloody rampages

Nathan Gooden: 2020 and 2021 were very tough years for everyone, Mike and I included. For me, the take away, is no matter how absurd or dark things look, there's always fun to be had and good deeds to be done.

MM: The easy answer is Axe, but Soren–Owen’s witch companion–has become my favorite to write. She’s so much fun, and she also has awesome powers. I mean, she can pull knives out of the tattoos all over her body. It’s kinda the best.

NG: Axe is just the best, but I really enjoy designing the creatures. At this point in my career, I’ve had to play in other creators' worlds or play by reality's rules when doing a book. This was my first time truly designing a world from the ground up.

MM: Really, I was kinda bored–that’s how Barbaric started. I sometimes feel that comics have gotten so story driven, like their TV shows, and so tame. I wanted to create something that’s reliant on character, voice,  and concept, which to me is the heart of the comics medium. And something that’s big and bold and in your face; something that felt classic yet also wildly unique. Barbaric is that series. It’s a story turned up to 11 and unapologetic about everything it offers.

NG: In a word, Fun. I wanted to have fun with everything I was drawing. It was that simple for me. If I didn’t smile or feel some emotion when drawing a character, I trashed it and tried again. I wanted the reader to have as much as I did , designing this craziness.  Owen’s design was always an idea I had  growing up. A giant hulking version of Wolverine, from X-men. A man so wild, it’s hard to tell where human begins and animals ends.

MM: Wanna drink this bottle of bourbon with me?

MM: We’ve got big plans for this series. Really big plans. We’re going to extend this story out in myriad ways, and in surprising ways. I’ve always said Barbaric is my Hellboy, and I particularly mean that in how Hellboy is constructed–it’s narrative isn’t always linear, it’s got spinoffs, side characters, and a huge tapestry that just never quits. That is what I want Barbaric to be. I want to be writing Owen, Axe, Soren, and who know who else ten, twenty years from now.

NG: I agree completely, I want to play in the Barbaric world for 100 issues. Then another 100 after that. The things I look forward to the most, are the gags and easter eggs that Mike and I have put in. Some of them don’t pay off for many issues, but when they do. LOOK OUT!

NG: I can’t remember any one in particular. Something Wolverine or Weapon X would be my earliest memory.

MM: The community, for sure. We’ve got the most amazing, loyal, and passionate readers. They’re the ones keeping the lights on for our beloved medium.

NG: The easy answer, DRAWING! I love to paint and draw, it's been my dream since day one.

MM: Because they’re modern myths! They’re stories with no restraints whatsoever. No budgets, no expectations to be proper or literary. They’re pure and direct and the combination of pictures and symbols weaved together to tell stories is as old as time itself–it’s no accident it’s survived this long. Our human brains get it; we crave it.

NG: Then you're the cool kid at the party. The movies and Tv shows everyone watches and talks about now, most of them started many years ago in the Comic book form.

MM: I’m productive all day, even when I’m asleep
NG: Late nights, when the world is sleeping

MM: I wouldn’t want to survive a zombie apocalypse, no thank you.
NG: Yes

MM: Fly, for sure
NG: Scared of heights, give me Invisibility 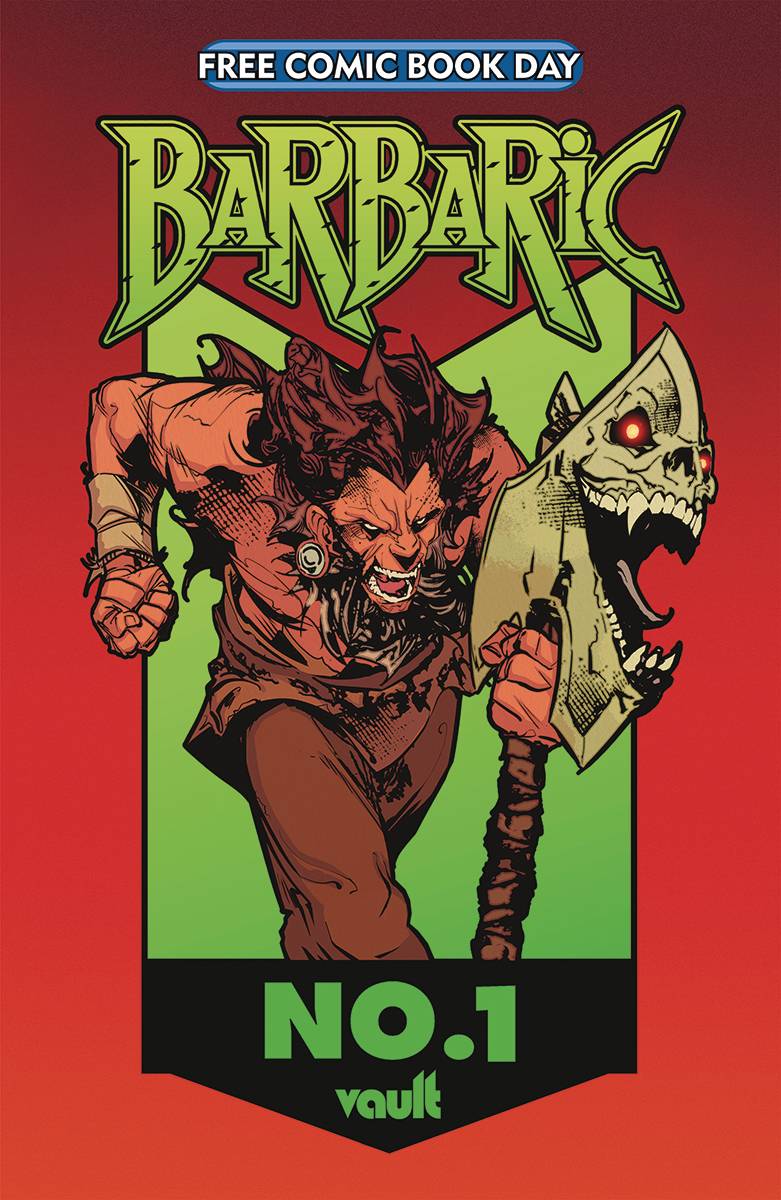 JAN220044
Owen the Barbarian has been cursed to do good with what remains of his life. His bloodthirsty weapon, Axe, has become his moral compass with a drinking problem. Together they wander the realm, foredoomed to help any who seek assistance. But there is one thing Owen hates more than a life with rules: Witches. Welcome to the skull-cracking, blood-splattering, mayhem-loving comic brave enough to ask: How can a man sworn to do good do so much violence? Hah! Messing with you. It's just... Barbaric.
Reprint Material
Rating: Teen
In Shops: Apr 06, 2022
SRP: PI
PREVIEWS Page #35 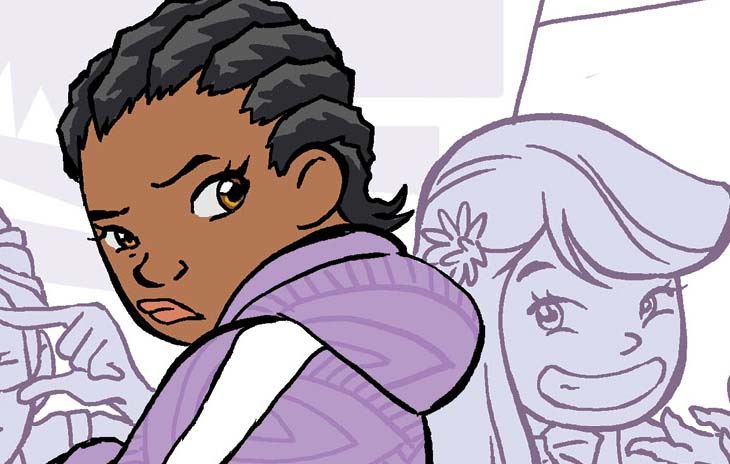 FCBD22 Interview: Who Are Your Enemies? Next Article