The Free Comic Book Day (FCBD) Retailer Selection Committee has selected fifty comic book titles for the industry's most anticipated annual event to take place on Saturday, August 14 at participating comic shops worldwide. The event, which traditionally takes place on the first Saturday in May, will return to a single-day celebration in August for the event’s milestone 20th anniversary.

“Every year, we strive to bring fans a memorable Free Comic Book Day experience, and with this year being our 20th anniversary, we hope it will be the best yet!” said Ashton Greenwood, Free Comic Book Day spokesperson. “The variety of this year’s comic book selection is really exciting! There’s something for every kind of fan, from the long-time reader to the comic book curious. We know comic book retailers are looking forward to treating everyone to a day of fun and discovery, so we hope fans will be able to safely visit their comic shops to celebrate!”

A complete listing of all fifty FCBD titles, including the twelve Gold Sponsor and thirty-eight Silver Sponsor comic books, can be found in the April issue of Diamond Comic Distributors' PREVIEWS catalog, on sale at comic book shops on March 24, 2021. They can also be viewed online at freecomicbookday.com. 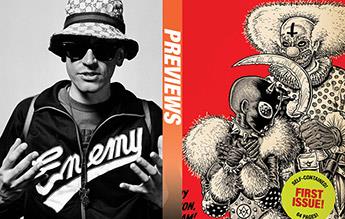