When you think of a superhero what characteristics come to mind? Are they law-biding and seek to uphold truth and justice, like Captain America or old-school Superman? Or are they a gritty vigilante, like Batman?

In AHOY Comics Free Comic Book Day title, Dragonfly & Dragonflyman, creator Tom Peyer unpacks these common superhero tropes to explore how their narratives and relationships to other characters are impacted by their outlook and crime-fighting style.

Check out our interview below with creator Tom Peyer to find out more about his exploration of superhero stereotypes, as well as how he plans to spend the big day on May 4! 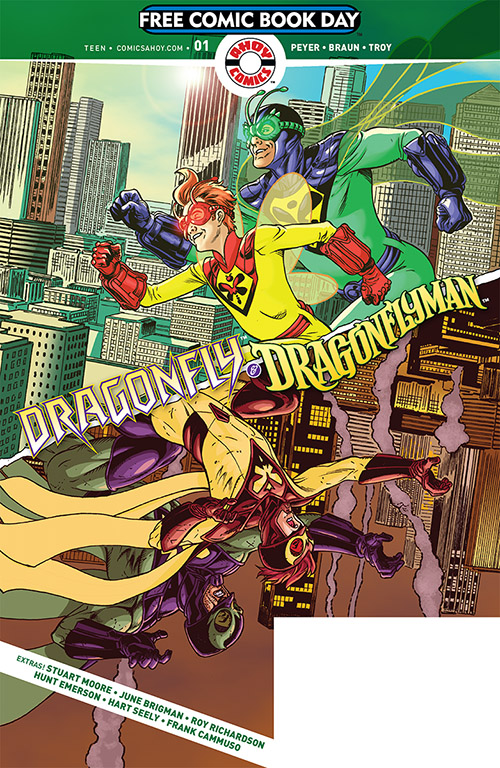 I’m happy to say that there’s no backstory to be learned. The premise is that two versions of one masked crime-fighter live on two different worlds, and we weave back and forth to see how different, and similar, their adventures are.

DRAGONFLYMAN is an old-fashioned, flag-saluting hero who upholds the law and trusts authority. DRAGONFLY is his modern version, violent and alienated, who seeks rough justice and sticks it to The Man. Last year in our series The Wrong Earth, these unlike-yet-identical heroes became trapped on each other’s worlds. This new Free Comic Book Day comic is a stand-alone showing them in action on their own worlds. In this particular story, we focus on their relationships with the police, which offers quite a contrast.

FCBD: What did you enjoy most about writing/drawing this comic?

I love going back and forth between the older and newer approaches to hero comics and trying to weave them together into a satisfying whole. And I really love the art: covers by Wrong Earth co-creator Jamal Igle, interiors by Russ Braun, colors by Andy Troy.

FCBD: Why should people pick up this Free Comic Book Day title?

Most of us who love super-heroes have been exposed to both gritty modern stories and more innocent old-fashioned ones. While the names and costumes often remain largely the same, the contrasts between the two eras can be both fun and funny.

It sounds like a cop-out, but comics has given us a zillion old-fashioned crime-fighters and a zillion modern vigilantes. This is for anyone who loves either, or both.

The first to make a huge impression was Superman Vol 1 #140, written by Otto Binder and drawn by Wayne Boring and Stan Kaye. It was about the Bizarros—artificial, imperfect duplicates of Superman and Lois Lane—and the epic, tragic events that followed after the first Bizarro baby was born. It’s a masterpiece. I still go back and read it.

It’s great to be part of a group that was formed by a love of something, in this case comics. It sure beats hate.

I don’t know that everyone should. What if Hitler read comics? You’d feel a little worse about reading them. Fortunately, Hitler hated comics. When you read one you’re sticking it to Hitler. So, you’re right. Everyone should read comics and stick it to Hitler! 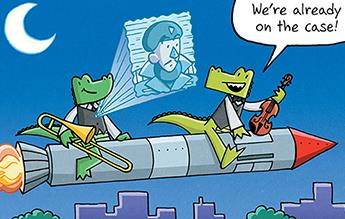