Rebellion is making sure you get the most bang for your buck on Free Comic Book Day, even though you won’t have to spend any bucks to their jammed-pack title, 2000 AD Regened.

Rebellion’s Free Comic Book Day title offers a collection of riotous, yet whimsical tales that are out of this world! Alien delinquents trying to hijack Free Comic Book Day, a group of alien friends taking up a game of HumanCraft, and a crime caper at an Aeroball game are just a portion of what you can expect in 2000 AD Regened.

Read our interview below with some of the creative minds behind 2000 AD Regened to learn more about what inspires their comics, and what they’re looking forward to on Free Comic Book Day! Then, click here to see a PREVIEWS Prevue of the comic!

Free Comic Book Day (FCBD): For those who might be new to your comic book, give us a quick rundown of the story! 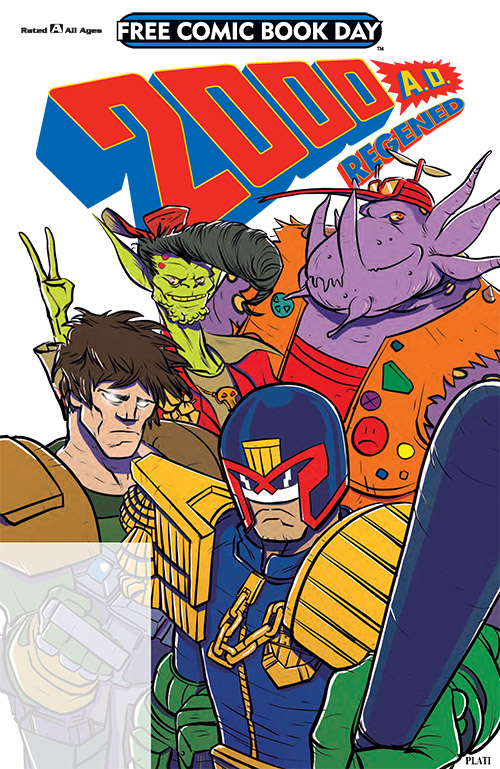 Alec Worley: I got into comics at such a young age, I’d probably say it was the artwork on books like Asterix and Marvel’s Star Wars. When I got into comics proper back in the late 80s (when comics and geek culture were NOT a cool thing to be into), it was probably for the range of stories and the kind of storytelling they could employ. The Vertigo books were a very big deal for me.

Ned Hartley: I've always loved the bright, colorful and imaginative stories that comics can tell! There's a connection to the creators you get with comics that you don't get with any other medium - it's fantastic. I love seeing words that I've written transformed into comic art. I've been lucky enough to work with some amazing pencillers, inkers, colorists and letters, and it NEVER gets old. I love how collaborative the process of creating comics is.

Matt Smith: I’ve been reading comics since the age of five. Got the first issue of British humor anthology comic Jackpot, and then graduated onto other UK titles like School Fun, Eagle, Scream and finally 2000 AD. Discovered US comics in my mid-teens by following my favorite writers and artists from 2000 AD (Alan Moore, Pat Mills, Kevin O’Neill, Simon Bisley, John Wagner, Alan Grant, Garth Ennis, Steve Dillon, etc), and been reading them ever since. I’ve been very fortunate in that I now get to work with most of these people in an editorial capacity, thirty years later.

Owen Johnson: Saturday morning cartoons like Batman TAS and UK kid’s weekly comic, The Beano. Inspired by these I went about producing my own mini-comics at school and never quit. [I like] building an entire world with simple tools and the imagination of a small handful of people. The shared trust of creator in reader in sharing interacting images and words. Also sound effects like PLOP!

INDIO: I've been into comic books since before I can remember, always loved them in all their formats, from The Beano to 2000 AD.

Worley: One of the (many) books I remember reading was MAD. I’d got hold of an issue featuring a Batman parody. It was so gross and hilarious that my mum confiscated it! The Brit comics TV Comic (which I loved for the Battle of the Planets strip) and Scream! were the first books I ever collected and re-read over and over.

Hartley: I think it was UK Children's comic The Beano. I remember buying as many back issues as I could get my hands on - I couldn't believe that adults could create something that kids enjoyed so much!

Smith: First UK comic was Jackpot. First US comic was Hellblazer (a few issues into the ‘Fear Machine’ storyline).

Flint: Jack and Jill Annual 1974. I still have it. It's a beautiful thing.

Johnson: UK reprints of DC material available on in the newsagent. Where The Wild Things Are by Maurice Sendak.

INDIO: First comic I can remember buying was an Issue of Marvels The Invaders.

Worley: For the same reason you should read any form of literature… Because – whatever stories you’re into, whatever characters you relate to, whatever themes resonate with you – there’s something out there that will blow your mind! It’s like this whole world that’s waiting to be explored and its treasures retrieved. If you’re stuck for something to read, talk to your local retailers, to librarians, to creators and editors on social media. Comics aren’t a club to which you need to learn a secret password. Start with the first thing that takes your fancy, then follow the artist, the writer, the genre.

Hartley: Comics is the most personal and direct art form there is. Every page you read has been poured over by writers, artists, letterers and editors - you don't create something like that without a sense of love!

Smith: Because they’re an incredibly versatile medium with which to tell stories – they can be funny, horrifying, exciting and touching in the space of a page turn. Perhaps no other medium is quite so limitless and impactful in the way it can marry word and image.

Flint: It tickles parts of the brain other mediums cannot reach.

Johnson: Because whether you’re into films, novels, cartoons, video games, animation, music or any other visual art-form, comics shares the same language. It’s all about telling you an exciting story in a visual way. Wonderful characters and new places. Comics take you outside yourself. Because no matter who you are, or what kind of stories you like to read or watch, comics has something for you. You just need to go looking.

Hartley: Has everyone said, "the free comics"? I used to work in a comic shop in London, and Free Comic Book Day was such a great way of getting people of all ages through the doors. I love the way that Free Comic Book Day lets everyone try out new comics, and hopefully find something they love. I really, really hope that it's energizing a new generation of comic book readers! I love seeing kids pick up their first comics and find something that lights a spark in them, you can see it in their eyes!

Smith: Free comics, and seeing busy comics stores. Very satisfying to see a shop heaving with bodies and people queuing to get in.

Johnson: So many people join in a giant celebration of the art form, both reading and sharing but also, everyone from friends and families taking a big trip down to the store is like a cinema visit. A ritual that shows what great characters and stories are out there. There’s something for absolutely everyone. Every year I try and take someone who has never been in a comic book store before to the local and make recommendations. It’s a joyful, happy day in the calendar.

INDIO: My favourite thing about free comic book day is being made aware of work I may not have picked up otherwise.

Worley: In a comic shop doing a signing, then in a pub doing some drinking.

Hartley: Wandering around London, trying to get my hands on as many comics as possible. So, the same as most Saturdays really.

Smith: Maybe behind a table signing in the 2000 AD FCBD issue in one of those heaving comic stores.

Johnson: At Eisner award winning Orbital Comics in Central London, signing copies of 2,000 AD Regened and having a gas with the other incredible creators, great readers and staff that hang out there. Orbital is a wonderful watering hole for creators like me.

INDIO: Hope to be doing a signing on free comic book day with the folks from 2000 AD. 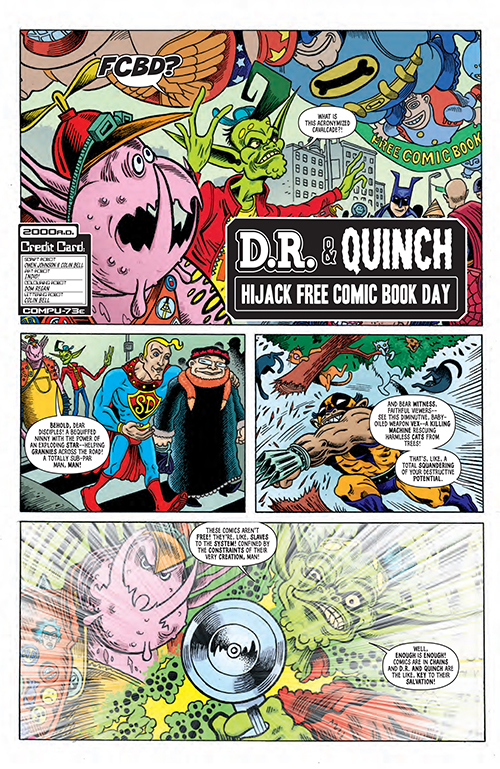 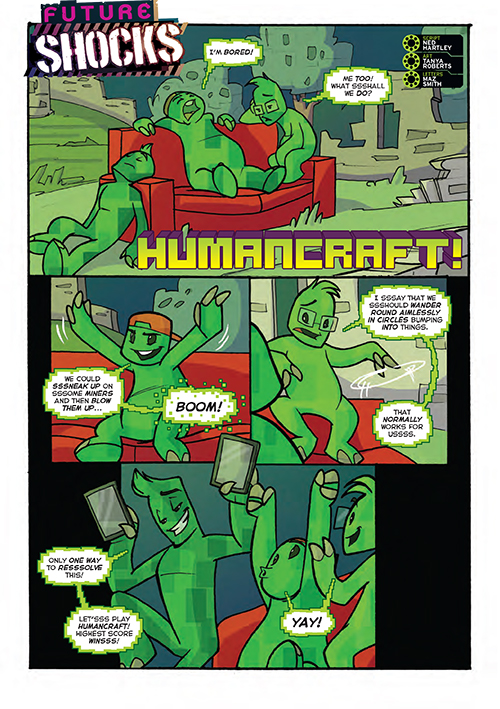 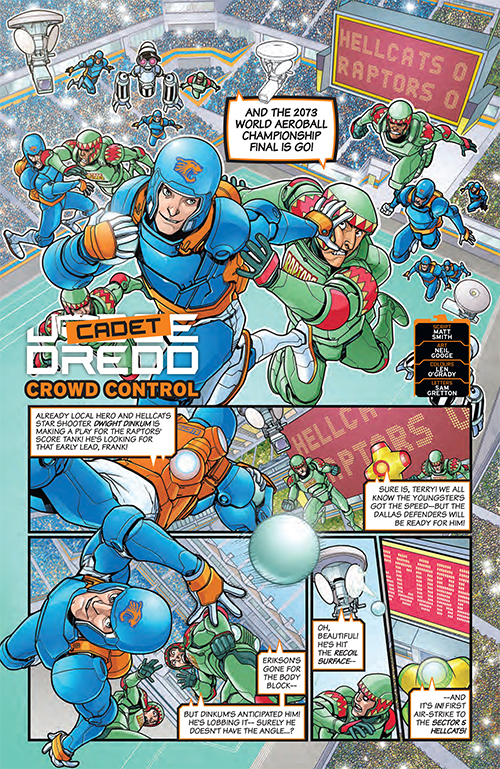 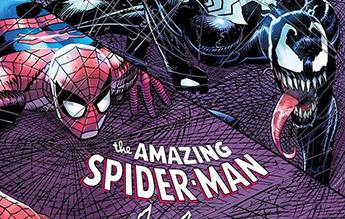