What do you do when you’re fighting yourself to defend everything you’ve ever built?

It’s existential question creators at BOOM! Studios attempt to tackle throughout the largest comic story arc the Power Rangers have ever seen. Ryan Parrott and Kyle Higgins built a story that bridges the worlds of Mighty Morphin Power Rangers and Saban’s Go Go Power Rangers, and tie them both into the events of Shattered Grid.

This massive story arc will pit the Rangers against Lord Drakkon – an evil version of Tommy Oliver (the green Power Ranger), from an alternate universe – as he attempts to eradicate every Ranger in existence!

Read our interview below with Ryan Parrott and Kyle Higgins, the creators of the Mighty Morphin Power Rangers FCBD issue! They give us the scoop on this massive event in the Power Rangers universe, and what they’re looking forward to on Free Comic Book Day!

Free Comic Book Day (FCBD): Power Rangers: Shattered Grid is the first comic book event in the twenty-five-year history of the Rangers. Tell us how this FCBD story ties into that massive event? 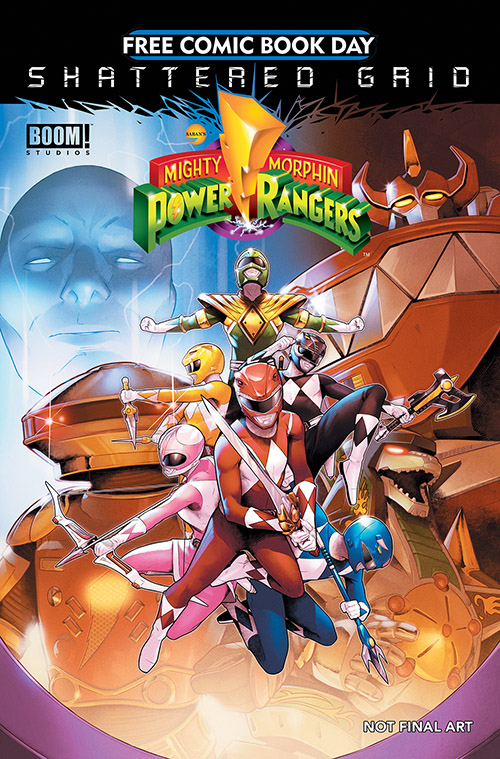 Ryan Parrott: “Twenty-Five Year History”. That still gets me every time. We were lucky enough with FCBD to create a two-tier story -- one that answers a valuable question about the event and at the same time, allows us to catch up new readers on anything they might need to jump right into Shattered Grid. Because the event ties into both our titles, Kyle and I wrote the issue together -- combining the epic world building scope from Mighty Morphin Power Rangers along with the smaller character work in Go Go Power Rangers. That’s a long way of saying -- the Mighty Morphin Power Rangers FCBD issue is a gateway into both series and stepping-stone into an event years in the making.

FCBD: For those who might be new to your comic book, give us a quick rundown of the story!

Kyle Higgins: Our book is about the Mighty Morphin Power Rangers... not as you remember them, but as you remember them making you feel. We're exploring the concept of teenagers with attitude, imbued with super powers and giant Zords, as they juggle homework with saving the world. It's the best aspects of serialized superhero telling, with no limitations.

Where this FCBD issue takes place is a pivotal moment in the series-- right at the start of the biggest Power Rangers comic story ever told. Every Ranger is at risk. An evil, alternate timeline version of Tommy Oliver-- calling himself Lord Drakkon-- is on a quest to conquer other Ranger teams from throughout the show's history, in an attempt to amass more and more power for himself. This FCBD issue looks at Zordon's hail mary attempt at getting help... from the very entities who created the Morphin Grid in the first place.

Parrott: I guess you could call it “young adult action adventure.” It’s a continuation of the classic television series, picking up where the original left off, filling in gaps and adding to the mythology.

Higgins: I was a big fan of the Rangers when I was a kid, so any opportunity to come in and use the medium of monthly comics to flesh out and develop something I used to love, is an exciting one.

Higgins: Since our series is in the midst of its biggest comic story ever told, I'd say that now is a great time to jump on board and see for yourself! We've got some super exciting twists and turns ahead!

Parrott: Image Comics was when I first got interested in comics. Seeing all those amazing artists creating their own characters and universes sparked me to pursing art through college, with the goal of becoming a comic book artist. But eventually, I realized I liked the stories more than the art, so I shifted into writing. My favorite thing about working in comics is 100% the moment you get that first wave of art. It’s so amazing to see something that was only in your brain, suddenly laid out in front of you on paper -- usually better than you imagined it.

Higgins: I've been a comics fan for as long as I can remember. I can't quite put my finger on what first attracted me to them-- they were always around my house, thanks to my uncle, though in reality... it was probably the Richard Donner Superman film, X-MEN The Animated Series, and Batman The Animated Series that turned me onto superheroes in general. When I discovered the monthly format of superhero comics-- sometime in the early 90s-- that was a game changer. I've been reading ever since.

FCBD: Many newcomers will pick up comics for the first time on FCBD -- what was the first comic you remember reading?

Parrott: It was actually The Punisher. My older brother collected Iron Man and Punisher and would let me read them when he was finished. For awhile, I thought comics were only for older kids.

Parrott: Comics are a once in a generation medium. Think about this: Hamlet is an amazing play -- but there is only story, written by one writer. That’s it. But characters like Superman and Batman have been getting new stories for over 75 years, being shaped and reinvented by countless writers -- and are all the better for it. There isn’t another medium that allows people who were once just fans to grow up and add their brick to their favorite characters in such an inclusive way.

Parrott: It’s the day I see the most kids at a comic book store. Maybe that’s slightly sad, but it gives me hope that the baton of comic book storytelling is still being passed down from generation to generation.

Higgins: I love the celebratory aspect of Free Comic Book Day, fans and creators taking an entire day to celebrate the medium that we all love. It's great!

Parrott: I live around the corner from one of the best comic book stores in the world -- Golden Apple, so I’m sure I’ll be stopping by to watch the madness and take home a few issues of my own.

Higgins: Not sure yet!. 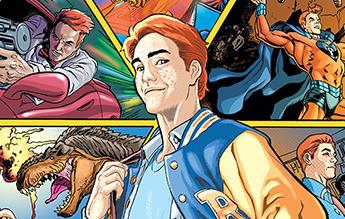