First Reactions to Guardians of the Galaxy 2 are Here!

The first reactions to Guardians of the Galaxy 2 are in! Here's what some of the critics had to say:

Guardians of the Galaxy Vol. 2 is filled with tons of surprises and an unexpected amount of emotion. Another Marvel winner.

Had tons of fun with Guardians of the Galaxy 2. Incredibly funny, beautifully colorful, and great continuations of the heroes. Super happy!

There's more beauty & depth & '80s love in GUARDIANS VOL. 2 than any of the Marvel movies. It's like a water-color acid trip full of awesome pic.twitter.com/m80OSUD31p

Don't think I've heard so much laughter at a press screening. People seemed to really be digging Guardians Vol. 2. Can't say more (yet)

Just got out of seeing #GotGVol2 My goodness what an experience! Absolutely loved it & you guys will too! Can't wait to see again!

GUARDIANS OF THE GALAXY 2 kept a smile on my face from beginning to end. Funny, action packed, emotional, and tons of surprises. Thumbs up. pic.twitter.com/aIz7Redwin

GUARDIANS OF THE GALAXY VOL 2. is very fun. Takes the EMPIRE "split up your characters" strategy. Drax is a hoot. Baby Groot steals the show

Going in with through-the-roof expectations, Guardians Vol. 2 still left me wishing it was never going to end. I seriously loved it. pic.twitter.com/kMvGQCeRiS

If you can't wait for Guardians of the Galaxy 2, you can head to your local comic book store to find these titles now. 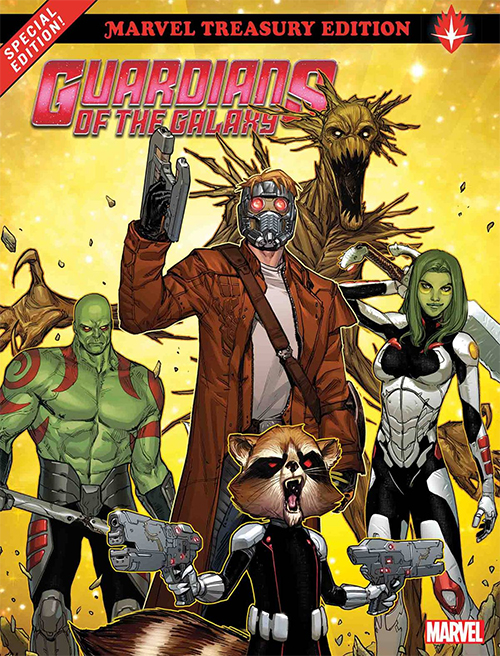 GUARDIANS OF THE GALAXY: ALL NEW MARVEL TREASURY EDITION
JAN17171101

The galaxy is bigger than ever in this giant-sized treasury edition - and this bunch is just the team to guard it! In the wake of two Annihilation events that rocked the Marvel Universe, Peter Quill, the Star-Lord, unites a ragtag group of misfits and loners to stand as its protectors. Among them, the deadly Gamora, Drax the Destroyer, fiery furball Rocket Raccoon and the tree that walks, Groot! Prepare to learn plenty about them -along with the spacefaring Iron Man, who signs up as they renew their mission with a special focus on defending Earth! Plus: Join Rocket on the run when he becomes the galaxy's most wanted raccoon! It's a cosmic mix of action, adventure and fun! Collecting GUARDIANS OF THE GALAXY (2013) #0.1 and #1, GUARDIANS OF THE GALAXY (2008) #1, and ROCKET RACCOON (2014) #1.
Rated T+ 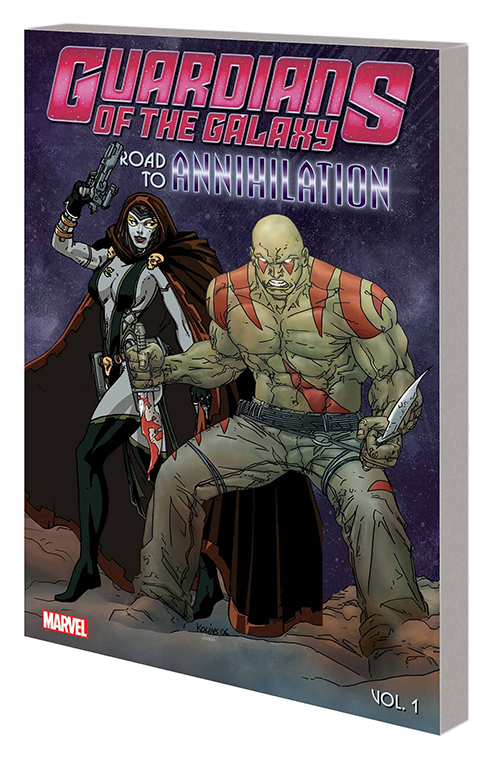 GUARDIANS OF THE GALAXY VOL 1: ROAD TO ANNIHILATION
OCT161025

She's the deadliest woman in the galaxy. He's the ultimate destroyer. Together, they're two of the Guardians' heaviest hitters. Now, find out what Gamora and Drax got up to in the years before the ANNIHILATION events united the team! Adam Warlock's latest resurrection brings his Infinity Watch allies back together - but will Gamora or Drax become an enemy? Drax's battle with a new Captain Marvel will plunge them both into the Microverse! When Thanos seeks to send all reality spinning into the abyss, Gamora joins an assemblage of heroes including Warlock, Spider-Man and Doctor Strange to stand in the Titan's way! And when She-Hulk takes on a case in space, Drax and Gamora are drawn into a trial of universal law! Collecting WARLOCK (1998) #1-4, CAPTAIN MARVEL (2000) #4-6 and #15-16, INFINITY ABYSS #1-6, and SHE-HULK (2004) #7-8.
Rated T+ 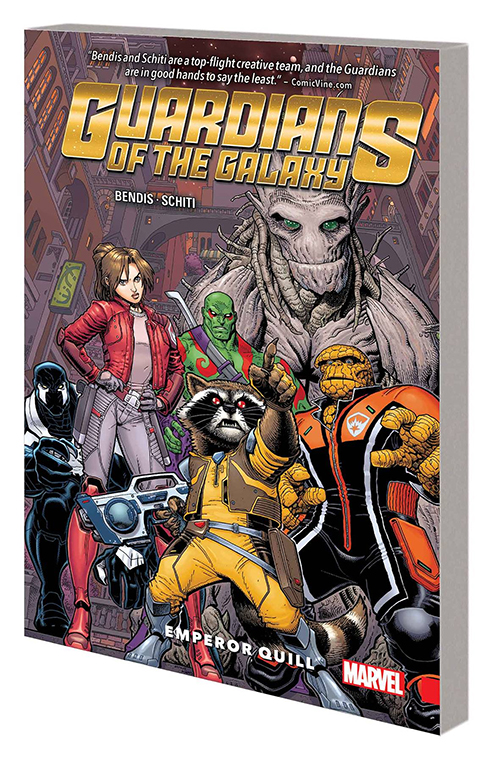 Peter Quill has abandoned the Guardians and his role as Star-Lord to be emperor of the Spartax, and Rocket has grabbed the reins as team leader - backed by Drax, Venom, Groot, Kitty Pryde and brand-new Guardian Ben Grimm, the ever-lovin' blue-eyed Thing! But what could put the team in the crosshairs of Emperor Quill and his Imperial Guard? Another old face is back, too, but is it a welcome return for Gamora, or have things changed in the eight months she's been away? When friends like these cause complications for Rocket and the gang, who needs enemies? They don't, but they seem to attract them anyway. And the newest threat to the galaxy is a doozy. His name is Yotat the Destroyer - and he will have blood. Collecting GUARDIANS OF THE GALAXY (2015) #1-5.
Rated T First, blast off with Star-Lord, Gamora, Drax, Rocket Raccoon and Groot as they head for the stars and right into an all-new ongoing series! Creators Gerry Duggan, Aaron Kuder and Ive Svorcina bring you over-the-top action and out-of-this-world adventure as the stage is set for May's highly anticipated All-New Guardians of the Galaxy #1! As this unlikely band of misfits returns to outer space once more, nothing will prepare them for their first run in with the new Nova Corps!

Then, head back down to Earth and the mean streets of Hell's Kitchen as the blockbuster creative team that brought you Civil War II, Invincible Iron Man and Ultimate Spider-Man bring you their next explosive epic in...The Defenders! Superstar creators Brian Michael Bendis, David Marquez and Justin Ponsor unite Daredevil, Jessica Jones, Luke Cage and Iron Fist as they go head-to-head with the new criminal element in the Marvel Universe. What new player is running things in the underworld? Find out here with a 10-page tale that leads directly into The Defenders #1 this June! [TEEN]